Part I:  How We Got Here

When people think of NAFTA, they think of the Bush years and Ross Perot’s “giant sucking sound”, but actually North American trade agreements are even older than that.  The concept of economic integration was not a new one at the time NAFTA negotiations started. In 1911, President William Howard Taft signed a reciprocal trade agreement with Canadian Prime Minister Sir Wilfred Laurier. After a bitter election, Canadians rejected free trade and ousted Prime Minister Laurier, thereby ending the agreement.

By August 4, 1942 the United States signed the Mexican Farm Labor Agreement with Mexico. Under this pact, the laborers were promised decent living conditions in labor camps, such as adequate shelter, food, and sanitation, as well as a minimum wage pay of 39 cents an hour. This program was intended to fill the labor shortage in agriculture in the U.S. due to World War II.

In 1965, the United States and Canada signed the U.S. – Canada Automotive Products Agreement that liberalized trade in cars, trucks, tires, and automotive parts between the two countries.  Well before NAFTA negotiations began, Mexico was liberalizing its protectionist trade and investment policies, which had been in place for decades. A more restrictive trade regime began after Mexico’s revolutionary period and remained until the early-to-mid 1980’s.

While Ronald Reagan was organizing his run for the 1980 U.S. presidential election, two of his policy advisers, Richard V. Allen and Peter Hannaford, were traveling with him in Europe. They developed and proposed to him an idea regarding cooperation in North America, especially in the energy sector. A few months later another colleague, domestic policy advisor Martin Anderson, suggested calling the proposal the “North American Accord”. It would create a common market among the United States, Canada, and Mexico. Reagan saw this proposal as a solution to undocumented immigration and other problems between the U.S. and its neighbors. By 1990, when NAFTA negotiations began, Mexico had already taken significant steps towards liberalizing its protectionist trade regime.

U.S. trade with its NAFTA partners has more than tripled since the agreements took effect which is much faster than trade with the rest of the world. Since 1993, trade with Mexico grew more quickly than trade with Canada or with non-NAFTA countries. In 2011, trilateral trade among NAFTA partners reached the $1 trillion threshold.  In 2016, Canada was the leading market for U.S. exports, while Mexico ranked second. The two countries accounted for 34% of total U.S. exports in 2016. In Imports, Canada and Mexico ranked second and third, respectively, as suppliers of U.S. imports in 2017. The two countries accounted for 26% of U.S. imports.

The economies of the 3 NAFTA members have become highly synchronized, so if one is doing well all the others are too. This kind of regional economic integration increases our regional power vis a vie other rising regions as Asia, Russia or the European Union.

The following figure shows the annual gross domestic product (GDP) growth rates in the United States, Canada, and Mexico from 1981 through 2014. Notice that U.S. and Canadian data moved similarly over the pasta 30 or so years. In the pasta decade, the Mexican economy also fell into sync: The correlation between U.S. and Mexico increased by over 100 percent. Source: https://www.stlouisfed.org/publications/regional-economist/april-2015/regional-versus-global-business-cycles (FEDERAL RESERVE BANK OF ST. LOUIS) 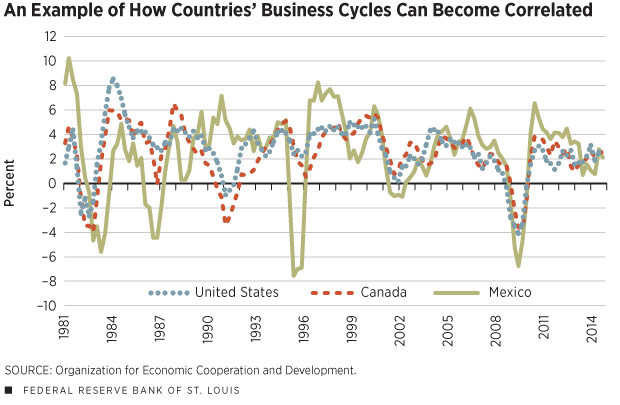 5 benefits for a Build-to-Suit with ATISA

A Talk on Current Trade Issues